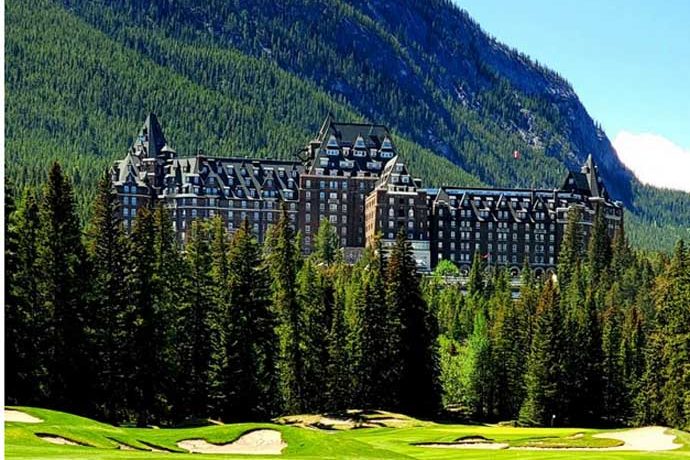 Mountains Seem to Frame Every Hole

By Alice and Danny Scott

Fairmont Banff Springs is known as the Castle of the Rockies, shining like a beacon of towering wealth and prestige, begging to be toured. Wandering the halls, shops, restaurants and galleries is almost an adventure itself. Originally built by railroad barons, its fame catapulted when Marilyn Monroe stayed while filming “River of No Return” along with her new boyfriend, Joe DiMaggio. Occupancy has never faltered since.

Positioned high above the convergence point of Bow and Spray rivers, the roar of Bow falls can be heard from most points on the property. “Since we can’t export the scenery, we will have to import the tourists,” said founder William Cornelius Van Horn.

Indeed. The golf is as spectacular as the hotel. Famed architect Stanley Thompson built two courses that match the natural beauty with challenge. His philosophy of framing each hole with a view of the mountains behind the green is evident on all 27 holes at Fairmont Banff Springs.

The Stanley Thompson 18 starts along the raging glacial river with rafters gleefully rushing by. Wind whistles through the pines as shadows dance in the bright light of this forested parkland mountain course.

A herd of elk roamed a fairway with a lone one near a green and a pair of teens on a ladies’ tee box. They all moved on without incident. Canada geese are still prevalent in Alberta though we thought they had all immigrated to the US. More