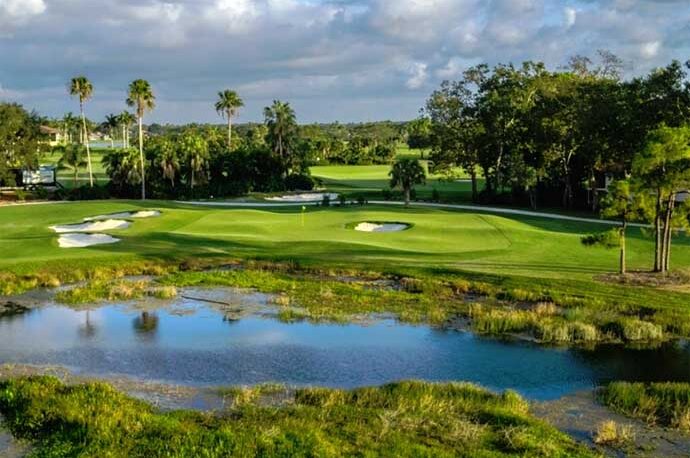 Festivities included a ribbon-cutting ceremony by Staples. followed by a shotgun start for those wishing to be among the first to enjoy teeing it up on the new layout along with a hole-in-one contest, raffle prizes, music and more. The Staple Course at PGA National opened for resort guests and member play on July 1.

Built on the former opening and finishing holes of the Resort’s Squire layout, The Staple is a take on the par-three course concept created for pure enjoyment while highlighted by intriguing fast-and-firm shot corridors, and in some cases, difficult to reach shelves on the dramatic, undulating greens. With hole distances ranging from 48  to 130 yards, The Staple is ideal for fast-paced, joyous rounds while using just a putter and a few short irons.

Additionally crafted for heroic tee-shots with numerous “hole-in-hole” pin locations throughout, The Staple Course’s unique figure-eight configuration with crossing holes at Nos. 2 – 3 and Nos. 7 – 8 provide social interaction meeting points with other players at an outdoor seating experience complete with fire pits and a café and bar area.

The Staple is also the perfect setting for golf groups to unwind and relax in a casual setting after playing the resort’s four “traditional” and celebrated 18-hole layouts: The Champion, The Palmer, The Fazio and The Estate courses.

“Our goal for The Staple Course was to combine classic course architecture attributes with a contemporary re-imagined approach by highlighting playability, a quicker pace of play, and simply creating an enjoyable golf experience for all,” Staples said. “We think guests are going to love The Staple Course so much they’ll want to play it multiple times in the same day.”

Opening later this summer at PGA National is its highly-anticipated “Match Course,” also created by Staples. Additionally built on the land of the former Squire Course, the 18-hole Match Course promises to display some of the most groundbreaking concepts in golf design while encouraging “match” versus “stroke” play. Both layouts are part of the ongoing $100 million capital revitalization touching every aspect of the celebrated property.