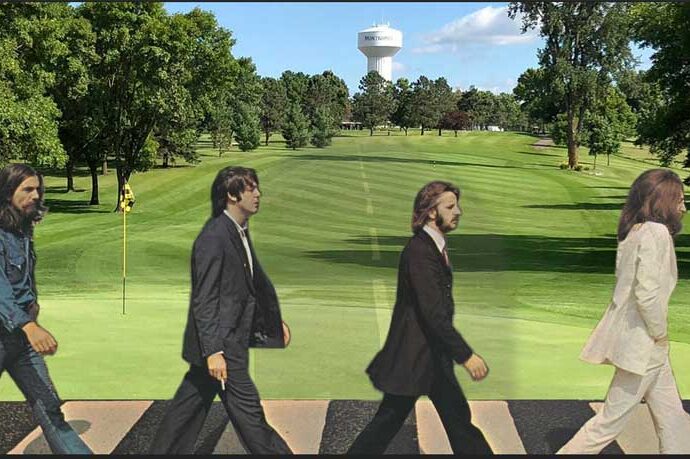 The Beatles Play on at Minneapolis-area Course

I grew up listening to the Beatles and their anthology of original music. Lo and behold, the director of “Lord of the Rings” Trilogy Peter Jackson has produced a three-part documentary on the 1969 making of the Beatles “Let it Be” album, which is streaming on Disney Plus.

For those of you who love golf and The Beatles, I have found the perfect 18-hole course for you. It’s located in Minnesota and owned by the biggest Beatles fan ever, Greg McKush, a 30-year PGA professional originally from Canada.

Montgomery National Golf Club is located about an hour south of Minneapolis and Greg has gone all-in with making the club a tribute to the band that set the tone for rock in the 1960s and beyond.

. He bought the course in 2018 and has been adding Beatles paraphernalia ever since. You are greeted by a 17-foot guitar as you drive in the parking lot. Once inside the clubhouse, there is Beatles memorabilia everywhere including a limited edition Beatles-themed jukebox (the same one Steven Tyler from Aerosmith owns). When you click on the website, the home page has an image of the Fab Four’s Abbey Road album cover super-imposed on the course.

No,the continuation of the theme doesn’t stop there. The scorecard is a piece of Beatles music themed with holes like “Strawberry Fields Forever,” the par 4 6th with an actual strawberry patch near the tee. The first hole is “With a Little Help From My Friends.” The 10th, another par 4, “While My Guitar Gently Weeps,” has a fairway bunker shaped like an Olson guitar which is 55 yards long and 20 feet at its widest point. The finishing hole has a one-ton yellow submarine floating in a pond that you have to maneuver to reach the green. I’ll let you guess its name. More