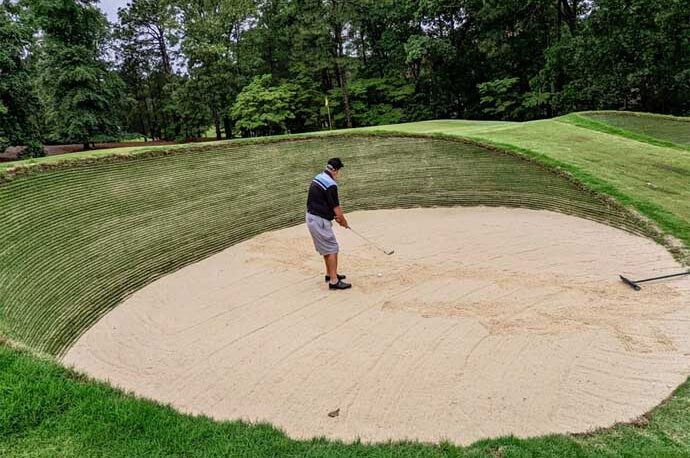 Beware the Bunkers at Talamore

The most famous of the 51 courses in the golf mecca called Pinehurst area is Pinehurst No. 2, recently named an anchor site for the U.S. Open by the U.S. Golf Association. This week the area will also host the U.S. Women’s Open at Pine Needles, and many more big events are sure to come to the area now that the USGA is moving its headquarters there.

The USGA will have plenty of courses to choose from, the most unusual being Talamore. A Rees Jones design that opened in 1991, Talamore has long been one of the Pinehurst area’s most popular layouts for both local players and visitors, but they probably best remember it because of the llamas that grazed in a fenced-in area near the No. 14 tee.

When Talamore opened, the llamas were used as caddies. That’s no longer the case, but they’re still on the premises as a photo op for golfing visitors looking for the unusual, and they’ve even been incorporated into the new flags on every green.

The original course underwent a 2016 renovation and more upgrades followed in recent years, resulting in the layout now being called The New Course at Talamore. Visiting golfers still have something new to photograph, and it’s a lot more fearsome than those docile llamas. The resort is one of the first in the country to install EcoBunkers. There are 10 of them spaced around holes 2, 5, 9, 15 and 17.

To say those bunkers are difficult to escape is putting it mildly. At least no one in my group could get a ball on a green from out of them, and the starter had advised us to just chip back to the fairway most of the time to minimize frustration. That was good advice.

These sod-wall bunkers are steep, and the tallest on No. 9 is seven feet high.