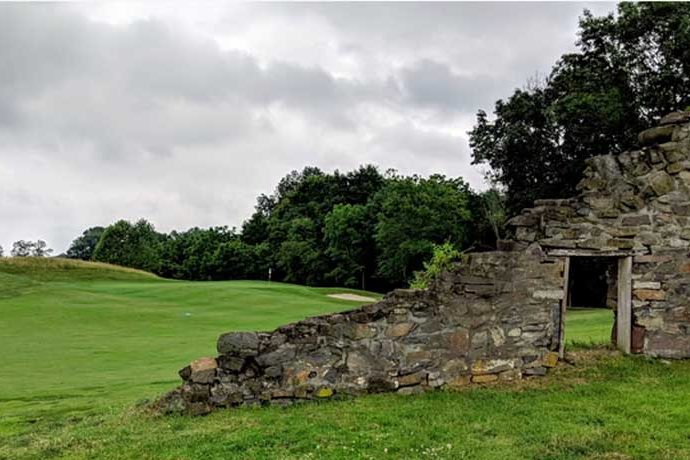 Can’t say I ever started a round of golf like a recent one at Raven’s Claw, a public course near historic Valley Forge.

You line up your tee shot and the most noticeable obstacle in an old brick house – or at least part of one. It doesn’t really come into play and host golf professional Jim Bromley doesn’t know why it’s there. He believes it dates back to at least the early 1800s.

Well, it is something that gets your attention—and it’s not a bad thing, either. It’s just something different.

Ed Shearon, who owns the course, also designed it. Raven’s Claw opened in 2005 and was built in conjunction with a pleasant neighborhood of traditional-style family homes on a 177-acre plot.

Shearon, who lives in the area and has designed several other courses, owns a big landscaping business. Raven’s Claw got its name from some of the birds that frequent the place. A tough stretch of the course – holes No. 9 to 11 – has been dubbed The Claw.

The ninth hole doesn’t bring you back to the clubhouse, so you don’t get a break when you take on The Claw.

Measuring 6,739 yards from the tips, Raven’s Claw has testy, undulating greens and some other interesting features. Two smokestacks loom above the layout, a striking feature though nothing like the old brick half-house. Shearon has also made excellent use of big boulders, which guide players at several spots along the course. More