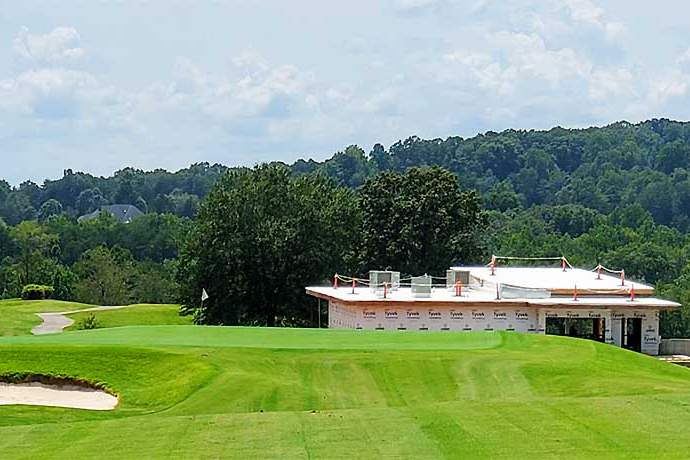 Clubs — at least the lucky ones– are sometimes able to build nice, new clubhouses even in these difficult financial times.  Cherokee Valley Club, a 28-year-old public facility 25 miles from the city of Greenville, S.C., is one of those but there’s more to the story.

Cherokee Valley Club Owner Matt Jennings wanted to add a premier dining experience when he and his uncle, Ted Levine,  bought the club in 2017. They wanted a place where families, couples, individuals, business people and – of course – golfers could share a sense of community.

By November, Cherokee Valley will have that, but it isn’t a case of a new clubhouse replacing an old one. The old clubhouse will revert back to its original use – as an events center.  The focus of the new one will be the Core 450 Restaurant, and executive chef Todd Warden is already on board to oversee the dining operation. The current golf shop will be moved to the first floor of the new building.

Making this dramatic move, however, also will necessitate a re-routing of the golf course – a beautiful one already, and one of the best public venues we’ve ever visited.  P.B. Dye, one of the sons of the late, great golf architecture couple of Pete and Alice Dye, was the designer.

The new clubhouse, under construction, will feature the Core 450 Restaurant and views of ninth and 18th greens.

P.B. Dye Got Married at the Cherokee Valley Club

For P.B., it’s more than just another credit on his resume.  He used the par 3 eighth hole, which has a 70-foot downhill drop and Glassy Mountain as a backdrop, as the site for his wedding.  P.B. and wife Jean were married on that spot shortly before Cherokee Valley opened in 1992.

With the creation of Core 450 Dye had to make changes to his original layout, one of which should stir some controversy. More