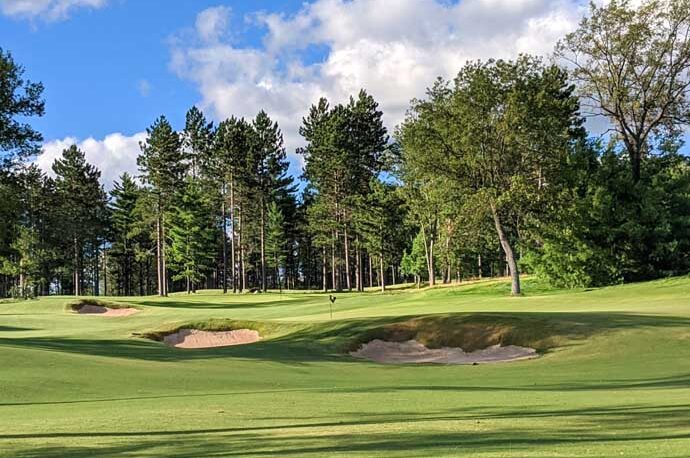 There was never a doubt that Forest Dunes Golf Club had one of the very best golf courses in Michigan, if not the entire United States. Tom Weiskopf designed it in 2002 – the same year that Golf Digest named it Best New Course in the U.S.

That started a rivalry with nearby Arcadia Bluffs for the best public course in Michigan, and it’s been ongoing. Arcadia added a second course last year, but Forest Dunes’ first 18-holer remains on the best in the U.S. lists by Golf Digest, Golf Magazine and Golfweek.

No facility, however, can keep up with the expansion that Forest Dunes owner Lew Thompson, an Arkansas trucking magnate, has engineered over that last five years.

The well-received Weiskopf design at Forest Dunes brought players to this small town, but not enough of them. Lodging was needed to keep them there, and now – between a lodge, villas and nine homes scattered around the property — there are 130 beds on the 1,300-acre site.

Golfers could play more by signing up for stay-and-play packages, but then there was just that one course. That was a drawback.

Thompson’s answer was to hire of Michigan architect Tom Doak for the creation of The Loop – arguably the most unique golf course in the country. It plays clock-wise (as the Black course) one day and counter-clock-wise (as the Red) the next. The Loop opened in 2016 as a walking-only layout, but now carts are allowed and rounds have increased.

“We’ve seen, as a destination facility, that stays are getting extended a night or two,’’ said Don Helinski, Forest Dunes’ director of operations. “But people aren’t interested in golfing themselves to death by playing 36 holes a day. They also want to get together with the people they’re with and hang out.’’ More