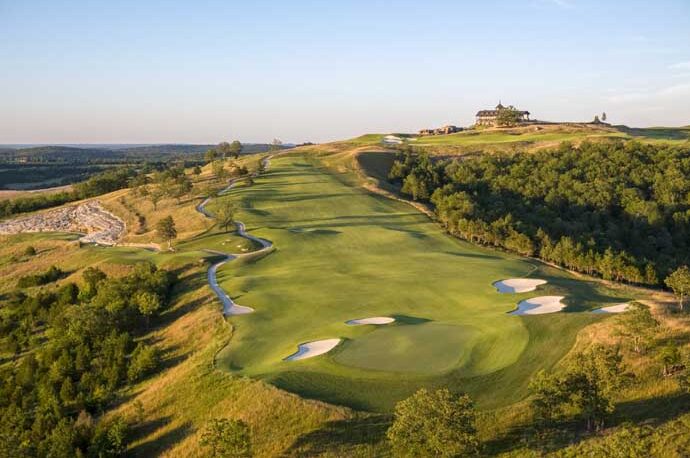 For years, Branson, Mo., seemingly had it all to attract out-of-town music fans. Now, it’s graduated into a top-shelf golf destination.

Your grandparents probably told you about the shows – music acts like Dolly Parton’s Stampede and comedy acts like Yakof Smirnoff, as wells as venues sporting familiar names such as Dick Clark, Mickey Gilley, Andy Williams and Jim Stafford.

Until recently, though, golf was a secondary entertainment option. Sure, it had a lineup of daily-fee courses, but nobody really came to Branson for the golf.

Well, that’s all changed, in large part, to the vision and financial commitment from Johnny Morris, CEO of Bass Pro Shops, whose Big Cedar Lodge is the new epicenter for golf in Branson.
Golf Portfolio in Branson has Expanded

And that’s just at Big Cedar Lodge. Among the other local courses available to visitors is Branson Hills Golf Club, an interesting Chuck Smith-Bobby Clampett collaboration with some outrageous green complexes. Branson Hills completes the must-play grand slam of 18-hole courses in the area.

The opening later this month of Payne’s Valley, Tiger’s first design for public play, plus the recent addition of Ozarks National, will attract a new demographic to the area.

Branson previously got national golf exposure by hosting the Legends of Golf event. More recently, two of the Big Cedar Lodge courses – Buffalo Ridge and Ozarks National – hosted PGA Tour Champions events on back-to-back weeks. You might have heard of the guy who won at Ozarks National  Phil Mickelson – who smoked the field in his Champions  debut. More