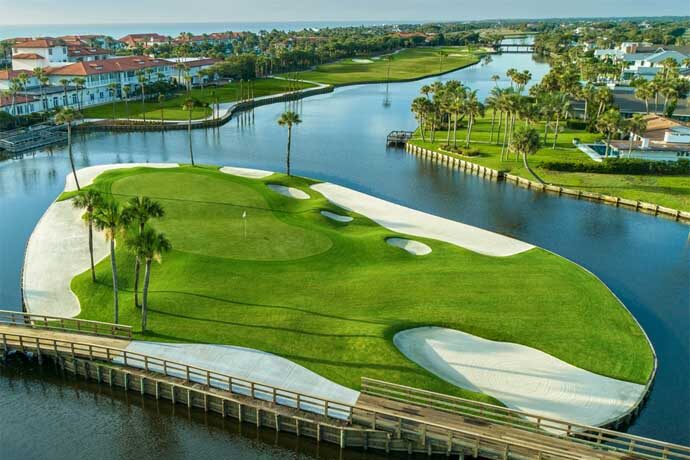 Florida’s most prestigious oceanfront country club, the AAA Five Diamond Ponte Vedra Inn & Club held a grand opening ceremony of its newly reimagined Ocean Course this past week. Famed golf course architect, Bobby Weed whose headquarters are in Ponte Vedra, was selected to transform the layout which has been a cornerstone amenity of the Club for over 90 years.

The picturesque Ponte Vedra Inn & Club Ocean Course is one of the club’s two 18 hole courses. Originally designed by well-respected British architect and professional golfer, Herbert Bertram Strong, the course was built without the help of construction equipment – 100 hundred mules were used to dredge lagoons and shape the moundings throughout the course. This is the third remodel, the first being completed by Robert Trent Jones Sr. in 1947 and again in 1998 by Weed.

As the Ponte Vedra Inn & Club’s course approaches its centennial, the comprehensive capital improvement included many enhancements: new turf grasses throughout, improvements to course playability with the addition of a new hole, expansion of the practice and teaching facilities, and upgrade to the infrastructure.

“I would like to thank Herbert Peyton, CEO of Gate Petroleum, for entrusting our team to update their layout,” said Weed. “As a long-time area resident, I receive great gratification in equipping the Ocean Course with a strong foundation for the next generation of members and resort guests.”

Now playing to a par of 71, the Ocean Course at 6800-plus yards captures the essence of a modern seaside design with expansive fairways grassed with Celebration bermuda, strategically placed bunkers and lagoons with newly designed green complexes covered by TifEagle ultradwarf bermuda and TifGrande on the tees. Expansive swaths of non-turf screening areas were introduced with coquina reducing irrigation and eliminating grass rough while adding a striking visual contrast and unique seaside value to the layout. More