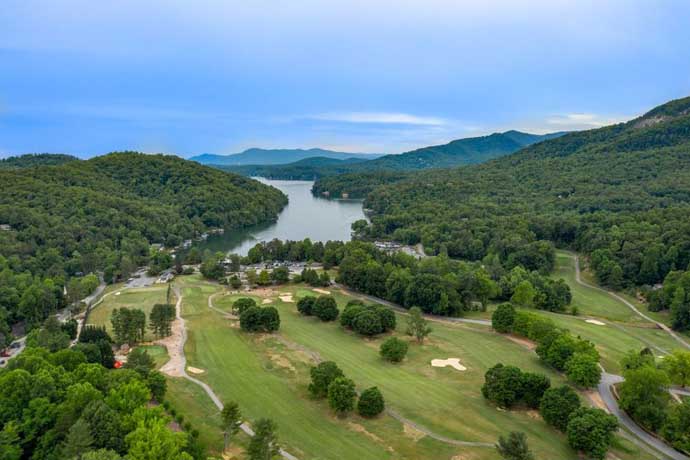 By Reid and Lee Spencer

If you’re a movie buff, you know Lake Lure.

You know it as the primary location for the 1987 film “Dirty Dancing,” which was shot in and around the 717-acre lake created in 1925 by the Lucius Morse family.

In fact, if you take a sight-seeing boat trip on Lake Lure from the dock at Rumbling Bald Resort, you’ll pass the long stone staircase where “Baby”—the character played by Jennifer Grey—carried a watermelon in one of the film’s most memorable scenes.

And if you remember the film in detail, you’ll know that Lake Lure—and specifically Rumbling Bald Resort—features golf as part of its core offerings. The 16th green on the rugged Bald Mountain Course served as the backdrop the scenes in “Dirty Dancing,” where Baby asks her father, played by Jerry Orbach, for money.

Bald Mountain is the shorter of the two courses—roughly 6,300 yards versus Apple Valley’s 6,800 yards from the back tees — but it features elevation changes that are nothing short of dramatic. The second shot on the par-4 11th hole, for example, plays steeply uphill to the high point of the course.

After that climb, the course winds its way back down toward the clubhouse. Bald Mountain was designed by W.B. Lewis, a protégé of prolific golf course architect George Cobb, who created the original layout at Charlotte’s Quail Hollow Club, host course for the 2022 Presidents Cup.