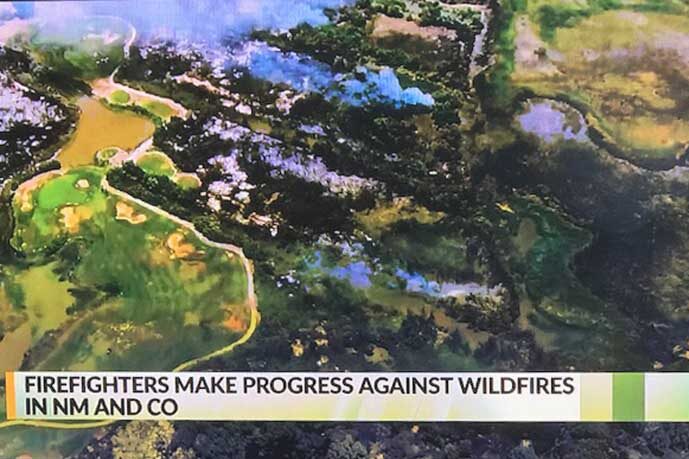 A brush fire threatened the City of Elephant Butte’s Sierra del Rio Golf Course, but the course was saved thanks to its irrigation system.

The Mims Lake Fire started Wednesday night and continued burning brush along the south edge of the course into the weekend.

The fire started on the south side of Mims Lake and threatened a housing complex. Embers drifted north into dry native areas near Nos. 10, 11 and 12 of the golf course.

The fire came within 30 yards of the houses on the south side of the lake, but bulldozers were used to build a berm to protect them, said Todd Barranger, general manager of Sierra del Rio.

Although the sprinkler system protected the turfed areas of the south end of the course, the fire jumped the tee box of No. 11 and burned a native area on an island of a water hazard, but otherwise the fire did little damage to the course.

Between 25 and 30 square feet of turf were damaged, Barranger said.

There was no damage to the clubhouse or other structures, he said.

“The fire burned right up to the south edge of the golf course,” Barranger told New Mexico Golf News. Saturday morning. “Right now, it’s smoldering and crews are in the Bosque putting out hot spots.”

“We had a couple of scary nights. My superintendent, Ron Mahaffey, and Wes Owens, haven’t slept in three days,” he said.

The community that borders the north edge of the golf course was not threatened, Barranger said.

In a way, despite the scare, the fire will end up being good for Sierra del Rio because it burned non-native salt cedar. “Mother Nature is clearing out the brush,” Barranger said. More