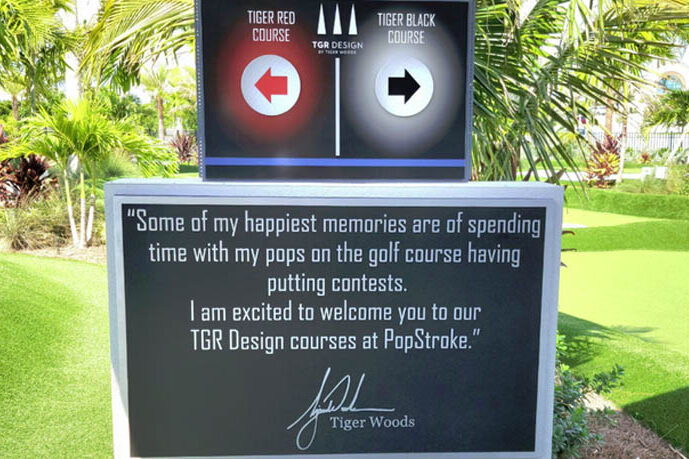 How could Tiger Woods’s new PopStroke National Putting Championship be scheduled any better for us?

The finals are Oct. 26-28 in Sarasota, Florida, about three miles from our home here, and the first list of qualifying tournaments included a Sept. 10 elimination at Deerpath, in Lake Forest. We have family members living within walking distance of that public golf facility.

PopStroke, for now at least, is a Florida thing. Woods opened his first location in Fort Myers and the second in our former hometown of Port St. Lucie (we enjoyed our introduction to the concept there). Since then he’s opened a location in Orlando prior to this year’s debut of PopStroke Sarasota, which is pictured here.

Basically the PopStrokes are high-end mini-golf destinations but they’re a lot closer to real golf than the miniature golf version, where you putt around contrived hazards to get the ball into a clown’s mouth (or something like that). In PopStroke you have artificial greens created by TGR Design (Woods’ design firm), and they’re challenging.

Woods made his announcement of the national tournament on the same day that PGA Tour commissioner Jay Monahan announced radical changes coming for the PGA Tour. Just a coincidence? I doubt it.

Anyway the qualifier at Deerpath will give Chicago golfers a chance to get introduced to The Lawn – a 30,000 square foot putting and chipping green that opened on July 6. It’ll be set up for a nine-hole putting course from 10 a.m. to 2 p.m. on Sept. 10.

Golfers pay $10 per round and can go around as many times as they wish to post a qualifying score for the national tournament. The first and second-place finishers qualify to play in Sarasota where a $100,000 prize fund will be on the line.

The tournament in Sarasota will be over 72 holes and will be open to both amateurs and professionals.