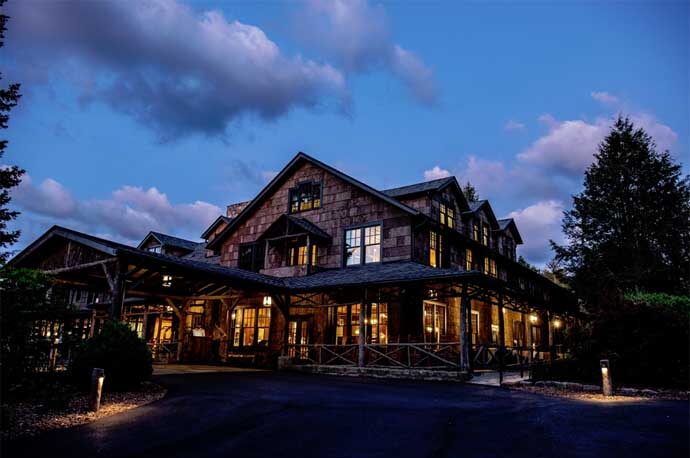 High Hampton Resort has been serving as a time capsule in the heart of the Blue Ridge Mountains in Cashiers, North Carolina for close to a century, where days consisted of morning walks along the lakefront and waterfalls, and lazy afternoons were spent swimming in the lake or fishing the mountain streams.

In the late 1800s, Caroline Hampton Halsted and her husband, William Stewart Halsted, one of the founding surgeons of Johns Hopkins Hospital in Baltimore, purchased the then 450-acre Western North Carolina property and its historic hunting lodge from her aunts, naming it High Hampton.

A North Carolina couple, E.L. McKee and his wife Gertrude, converted it to an inn in the early 1920s. Ever since then the McKee family has been welcoming guests seeking relaxation and refuge from the sweltering summers. Today this unique resort and club, listed on the National Register of Historic Places, sits on more than 1,400 pristine acres of Blue Ridge countryside near the Nantahala National Forest.

My wife Carol and I spent part of our honeymoon at High Hampton in the fall of 2004, enjoying the colorful autumn leaves, the historical resort, and its warm and cozy four-sided fireplace at breakfast and during the chilly evenings. The golf course was a fun getaway traversing the rolling hills around the resort which needed some TLC.

In 2017, a trio of family-run Southern companies, all with ties to the area, purchased the aging Inn and Resort and sought to preserve the spirit of High Hampton while making thoughtful updates that would ensure another hundred years of memories.

One of the new owners, Sandy Beall, cofounder of Tennessee’s Blackberry Farm and Blackberry Mountain, first visited the storied High Hampton property with his family in 1982. Sandy tried to buy it then, but the Mckee descendants declined and instead charmed him into purchasing a private home in one of their residential communities.

Now, Beall and the Blackberry team brought their decades of hospitality expertise to the reworked inn and its two restaurants, which began welcoming guests again this spring after nearly three years of renovations.

“High Hampton is truly a one-of-a-kind property,” says Sandy Beall. “We’re working to respect that in everything we do including how the Inn will be operated. Independent of our other properties, the food, style and sensibility of the Inn will reflect the charming character of this classic mountain retreat.” More