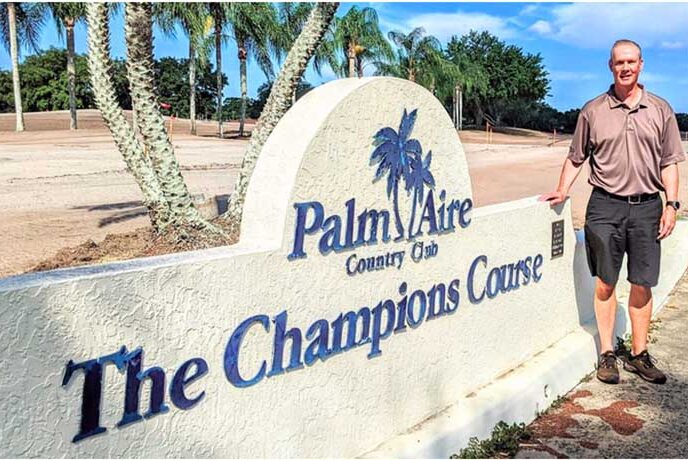 Mike Benkusky had worked basically in the Midwest throughout his career as a golf course architect. That’s not surprising, given that he grew up in Iowa, did his college work at Iowa State and then entered the architectural world under the tutelage of long-time Chicago-based architect Bob Lohman.

In 2005, Benkusky opened his own design firm, based out of his hometown of Lake in the Hills. His Illinois creations are topped by St. Charles Country Club and Arlington Lakes, and his remodeling efforts included Stonebridge, this year’s Illinois Open site in Aurora; Bloomington Country Club and the East course at Countryside, in Mundelein. He’s also done considerable work in Iowa and Indiana.

That’s why it was an eye-opener when Mike Benkusky was named to overhaul The Champions course at Palm Aire Country Club. Formerly called DeSoto Lakes, the Palm Aire club has 36 holes. The older of the 18-holers – and the one getting Benkusky’s attention now – was designed by Dick Wilson. It opened in 1958.

The other 18-holer, called The Lakes, was designed by Joe Lee and opened in 1982 The membership approved a $2 million budget for Benkusky’s work on the Champions and is considering an updating of The Lakes as well.
Runway tee boxes, a trademark of Dick Wilson courses, will be eye-catching when the Champion course re-opens.

Wilson and Lee worked together on many projects before Wilson’s passing, at age 61, in 1965. Wilson’s work in Florida touched some well-known courses – Bay Hill, Pine Tree, the TPC Blue Monster at Doral and PGA National. Lee, who died in 2002 at the age of 81, was also active in Florida where he either designed or renovated about 80 courses.

Benkusky had never worked in Florida before, but his Illinois background was helpful in his landing the job. Though both Wilson and Lee spent time as Florida residents, they did combine efforts on a major Illinois course – Cog Hill’s Dubsdread layout that was a long-time PGA Tour site. The Lemont course was the site of the last 16 Western Opens (1991-2006) and was the part-time base of its successor, the BMW Championship.

The Western Golf Association conducted the Western Open and has taken the BMW Championship, which is part of the FedEx Cup Playoffs, to a variety of sites since 2007.

In Benkusky’s case, his knowledge of golf history overcame the fact that Midwest courses have different soils and grasses than those in Florida. Palm-Aire members were impressed by that.

“I got a recommendation, and –with what Dick and Joe had done – I was familiar with both,’’ said Benkusky. “I was as interested in their (Palm-Aire) history as they were themselves. I’m also finding that Florida is a little easier because of the soil. It’s all the same sandy material.’’ More