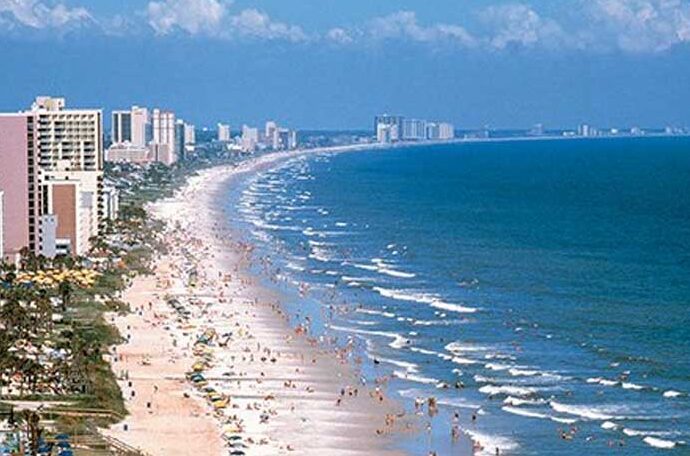 What’s the Capital of American Golf?

Where is the capital of American golf?

Depends who you might ask, as various destinations claim the title. But long ago, a 90-mile stretch of highway along the Atlantic Ocean centered around Myrtle Beach, SC, laid claim to the unofficial title.

The Grand Strand has, depending on who is counting and what day it is, more than 100 golf courses that tantalize players of all tastes and playing abilities. There are courses designed by the best, including Nicklaus, Ross, Jones, Dye, Garl and Fazio.

You name it, they have it, along with great food, sparkling beaches and a bevy of nighttime activities.

While Mother Nature has wielded her wrath in recent years, from Hurricanes to more than 100 inches of rain last year like many East Coast venues, the beauty of the Grand Strand is that the great weather outweighs the bad, and even the bad days can be just wonderful.

We found that out in March when visiting the Grand Strand of Myrtle Beach for the first time in more than a dozen years. As Jon Bon Jovi once crooned, “Who says you can’t go home again?” Because March or April was an annual home for many years before we visited new and different places.

Quite frankly, at the end of the week we wondered why we ever stopped going there.

Yes, there was chilly air. But the hospitality was top notch, the courses first rate, and the overall experience a stellar one.

Oh, there was a difference from the old days.

Right off the bat, Route 31, a newer bypass, allowed travel north and sound a whole lot easier. The competition for food and lodging as well as greens fees kept prices affordable, and the pace of play on the courses we sampled was, in a word, brisk.

In its hey day the Grand Strand – stretching from Georgetown, S.C., to the south to above Little River, N.C., to the north – was generally accepted to have approximately 130 golf courses. The economic challenges of 2008 along with growth such as roads and infrastructure caused the closure of courses, as well as a sort of natural selection of some venues being better than others. More